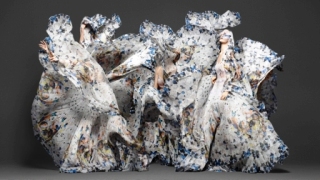 courtesy: Alexander McQueen/Solve Sundsbo
After flashing the news first in August, 2013, the British fashion brand Alexander McQueen is finally out with its maiden collaborative line with the well-known English artist Damien Hirst.
Created to mark the tenth anniversary of the London-based label’s ubiquitous skull-print scarves, the dark limited-edition 30-piece scarf collection is a re-adaptation of Hirst’s ‘Entomology’ series.
Exclusively available in McQueen boutiques and alexandermcqueen.com, the chiffon, pongé, twill and cashmere made ensembles feature butterflies, bugs, spiders and other creepy crawlies laid out in kaleidoscopic geometric shapes to form the signature McQueen skull motif.
The fashion label has also released a campaign video, shot by the famous Norwegian fashion photographer Sølve Sundsbø, showcasing some of the pieces from the latest collection.
McQueen’s signature skull-print scarves were first introduced by the brand’s late eponymous founder, Alexander McQueen, as part of the label’s spring/summer 2003 collection.
Known for its luxury fashion clothing and accessories for men and women, the Alexander McQueen label commands a strong client base that includes the likes of Nicole Kidman, Penélope Cruz, Sarah Jessica Parker, and Rihanna.
Bristol-born 48-year-old Damien Hirst’s Entomology series showcases a range of colourful insects woven into a kaleidoscopic artwork.