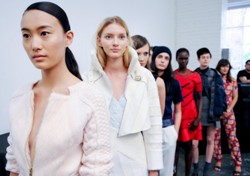 The International Woolmark Prize is an award for outstanding achievers in the early stages of their career who have shown promise and dedication in establishing and growing a fashion business.

The 2014-2015 International Woolmark Prize will be open to men’s and womenswear designers, CFDA members, and for the first time, non-members. Last year’s US Winner was Joseph Altuzarra.

A men’s and womenswear regional finalist will be awarded AUD$50,000 each and the opportunity to compete at the international final event in 2015.

The global men’s and womenswear winners will be awarded a further AUD$100,000, and their winning collections will be commercialized through a network of leading retail stores including Saks Fifth Avenue, New York; Harvey Nichols, London; Joyce, China and 10 Corso Como, Milan.

Last year’s USA Regional winner Joseph Altuzarra, will go onto compete in the 2013/14 International Woolmark Prize final event which will be held during Milan fashion week.

The judging panel for the final event is as follows:

Council of Fashion Designers of America