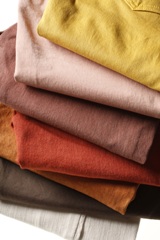 "It's a denim reboot!" Thomas Dislich, Director for Europe and Asia, succinctly sums up Spring/Summer 2015!

"The blue gold is back on top as the protagonist in all collections. Denim is once again a fashion dynamo, and will significantly impact the shape of the market." "Real denim" with cross-effects and irregular thread structures will play an important role. Discreet lines will more likely be in the background, while vintage is unmistakably at the fore!

VICUNHA is known worldwide for incredible collections and production volumes – over 100 different items per season and 16 million meters produced per month – and even better known for its pioneering role in South America.

The denim powerhouse meets the highest international standards in terms of environmental protection, social responsibility, recycling and the sustainable, clean production of cotton. For years, VICUNHA has worked exclusively with cotton farms in Brazil and the USA whose business and employee policies meet the approved standards. In addition, the company is one of MARKS & SPENCER's "Plan A" partners.

July 2013, BCI's South American debut took place in the VICUNHA showroom in São Paulo. A separate BCI corner was installed as a platform for documentaries and presentations, in order to introduce BCI to major South American partners. A BCI representative was specially flown in from Geneva to Brazil for the event. Production of 16 million meters/month + one million meters of special routes/year.

Thomas Dislich is pleased about the "denim reboot" – as is the Brazilian denim powerhouse. VICUNHA has a unique global position. In 2013, the giant produced 16 million meters of denim per month for the world market in five of its own factories, which were sold with three-day service in its own branches and warehouses in America, Europe and Asia.

"Our broad range serves 4,500 customers worldwide, and we do not depend on any individual brands. VICUNHA is not a manufacturer that sells, but rather a commercial company that also produces.

"We produce very large quantities under our own direction, which gives us extraordinary flexibility and makes possible delivery within three days," Dislich says. VICUNHA is able to successfully and self-sufficiently offer market trends – and make them immediately available.

An additional one million meters of denim per year is produced through the "boutique business," with additionally developed product lines and leased, specially-monitored production lines in Turkey (100,000 meters), Pakistan (600,000 meters) and China (300,000 meters).