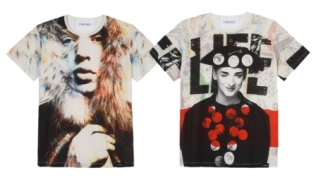 After a long and highly fructifying career as a photographer, David Bailey has finally decided to try his hands in fashion designing.
The English lensman of international repute has teamed up with the London-based brand The Bleach Room to unveil a capsule line of T-shirts.
Exclusively available at the high-end department store Selfridges, the range is inspired from the 76-year-old’s self-shot collection of celebrity portraits.
Based on collage style prints, the T-shirts feature images of Mick Jagger, Johnny Depp, John Lennon, Grace Jones, Jack Nicholson and Michael Caine.
Founded in 1909, Selfridges is a chain of upmarket department stores located in London, Manchester and Birmingham.
London’s National Portrait Gallery is going to host a retrospective exhibit, entitled Bailey's Stardust, highlighting the works of the famous photographer from February 6, 2014 onwards.