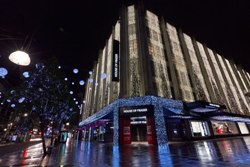 House of Fraser, the UK and Ireland’s premium department store group, updates the market on its performance for the 52 weeks to 25 January 2014.
Financial highlights for the period include:
- Record sales up 3.6% on a like-for-like basis (excluding VAT) to £1.2 billion;
- Online sales (excluding VAT) increased 41%, representing 12.2% of sales;
- Continued House Brand sales and cash margin growth, up 13% and 20% respectively;
- Highest ever gross profit of £430.6 million, up £26.8 million;
- Gross profit rate of 36.14%, up 108 basis points on the previous year;
- Adjusted EBITDA of £60.2 million, up 8.3% on the prior year (2013: £55.6 million);
- Cash flow from operations up 30% or £15.0 million to £64.8 million (2012/13: £49.8 million);
- Net debt of £131.4 million reduced by £25.8 million (2013: £157.2 million) including year-end cash balances of £120.0 million (2013: £92.7 million) and un-drawn RCF of £85.0 million; and
- Pension deficit reduced by £26.3 million to £20.6 million (2013: £46.9 million), following the merger of the Group’s schemes.
Operational highlights for the period include:
- Further enhancement of the Group’s website, including a redesign of the site and other enhancements increasing conversion; an improved distribution proposition with market leading delivery options to customers homes and to our stores; and an expanded product offer with the introduction of many new brands;
- New House Brand launches including Corsivo, an Italian inspired mens formalwear collection, as well as range extensions, with particularly strong performances from Linea across womenswear, menswear and home, Dickins & Jones womenswear, Label Lab womens and menswear, and Howick menswear;
- A strengthened Premium branded proposition with new introductions including brands such as Boss womenswear and Hallhuber and rollouts of numerous brand and concession partners;
- Continued enhancement of store environments, driving positive overall like for like sales growth in stand-alone stores; and
- The opening of the Group’s first international store in Abu Dhabi.
Click here to view full results.