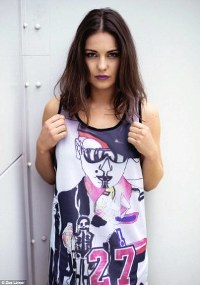 courtesy: Daily Mail/Zoe Lower
After its immensely popular fast sold out coloured jeans collections, the UK-based young fashion label Pocket London is branching out by adding some fun casual pieces to its product portfolio.
Owned by the BAFTA award winning English television series ‘Made in Chelsea’ star Louise Thompson, the brand’s upcoming spring/summer 2014 line will feature an array of stylish separates.
Peppered with attention grabbing prints, the range will include white and purple vests, pink tie-and-dye patterned T-shirts, slogan jumpers, and crisp white shirt and orange skirt combos.
In addition to designing the collection with the label co-founder Edward Page, the 23-year-old television actress Thompson has also modelled in some of the pieces from the clothing line, which is set to be available for sale sometime around mid-June, 2014.
Launched in 2011, Pocket London clothing is available online as well as at the TnT Showroom, Wolf & Badger and Natasha Coote stores.
The firm is currently prepping up for its London Fashion Week debut in September, 2014. The label will showcase its Spring/Summer 2015 line, titled The Spirit of London, created in partnership with the London-based womenswear designer Maya Finkelstein Amrami, at the bi-annual high-profile event.