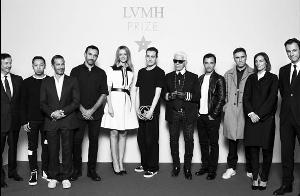 The Prize of the Jury of the First Edition of the LVMH Prize for Young Fashion Designers was awarded to Thomas Tait. The creative duo Miuniki and Hood by Air were distinguished by a Special Prize.
The Jury of the LVMH Prize for Young Fashion Designers - Nicolas Ghesquière (Louis Vuitton), Marc Jacobs (Marc Jacobs), Karl Lagerfeld (Fendi), Humberto Leon (Kenzo), Phoebe Philo (Céline), Raf Simons (Dior), Riccardo Tisci (Givenchy) - as well as Delphine Arnault (Executive Vice-President of Louis Vuitton), Jean-Paul Claverie (Advisor to Bernard Arnault ) and Pierre-Yves Roussel (Chairman and Chief Executive Officer of the LVMH Fashion Division), have chosen Thomas Tait as winner of the very first 2014 edition of the Prize.
Delphine Arnault said, "The Jury was captivated by the personality and the work of Thomas Tait. He is a great talent. I'm proud LVMH can help him develop his brand. I have no doubt though all the other Prize finalists will have an amazing journey and I wish them luck". The 3,00,000 euros grant comes with a one year mentorship with a dedicated team within LVMH to assist the designer's development.
Due to the competition's extraordinarily high level, the Jury decided to award two special prizes: the first to Miuniku, and the second to Hood by Air. They each win 1,00,000 euros and a yearlong mentorship.
Three fashion design school graduates have also been awarded with a prize: Peter Do (Fashion Institute of Technology, New York), Teruhiro Hasegawa (Central Saint Martins College of Art and Design, London) and Flavien Juan Nunez (La Cambre, Bruxelles and the Institut Français de la Mode, Paris).
They each win 10,000 euros and will each be joining a different LVMH fashion house for a one year job contract, Peter Do at Céline, Teruhiro Hasagawa at Givenchy and Flavien Juan Nunez at Christian Dior.
The school they graduated from will also receive 10,000 euros to symbolize LVMH's support to education and establishments that allow fashion to renew itself in order to reach a higher level of excellence.