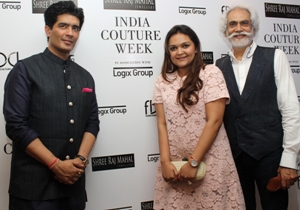 In the current exciting age of Indian retail and fashion, Chandni Nath Israni, Director Logix group announced the grand launch of the Logix City Center Mall with its collaboration with the Shree Raj Mahal India Couture Week.
Bringing forth the cinema and fashion within the mall Logix group has teamed up with Designer Manish Malhotra for his grand show on 19th July at the couture extravaganza.
The Logix City Center is coming up with 15 screen state of art multiplex PVR entertainment as well as first Imax of Northern India. The Mall will also have largest hypercity to provide truly international shopping experience, where customers can shop in comfort in a large, modern and exciting environment. There will be a dedicated area called Destination Couture in the City Center mall for Indian and International store.
Chandni Nath Israni, Director, Logix Group said, “We are happy to announce the grand launch of Logix City Center Mall during the India Couture week 2014. The Logix City Center Mall is located at the nodal point of Noida City Center, we are also enthralled to announce that we are also presenting the show of designer Manish Malhotra at the Shree Raj Mahal India Couture week."
Designer Manish Malhotra said, “Couture week is very special to me as its my biggest show of the year and now with my haveli flagship store in delhi this year is most special : Portraits' my couture collection 2014 is about timeless embroideries in todays contemporary cut make it a timeless moment : Logix group coming up with Logix City Center Mall where there will be fashion and Northern India's first IMax associating with them, for my couture show is synergy of art fashion and cinema."
Sunil Sethi, President FDCI said, “This is the best platform to showcase the Indian Couture with our associate partners Logix group since they would have a dedicated area called Destination couture in the all new Logix City Center Mall. Logix Group is synonymous with quality, dynamism and growth. The group has successfully carved a niche for itself in this competitive scenario by delivering premier facilities."