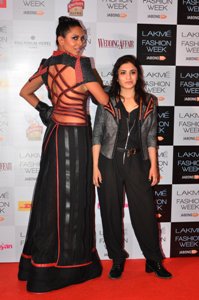 "NEZ", the designer label by Neha Agarwal will make its flamboyant debut in the Gen Next category at the forthcoming Lakme Fashion Week Winter/Festive, 2014.
NEZ manifests an infusion of distinct influences, audacious characteristics with wild illusions conceptualized for an eccentric, liberal-minded target audience, with a penchant for the goth look.
At a Preview hosted in Mumbai yesterday, none other than Candice Pinto showcased an edgy, goth inspired design by the young Neha Agarwal.
"Niola Doa" by NEZ is an avante grade, evening-wear collection which personifies “Apocalyptic Beauty”, reflecting the dark side of a female’s alter-ego.
Its artisanal aptitude accentuates outlandish individuality, exploring key fundamentals of "Self-Expression" provoking limitless imagination of design concept and philosophies.
The collection draws inspiration from the Ethiopian “Mursi Tribe”, the most primitive existent tribe. Their distinct feature of self-decoration provokes a sense of brashness by its raw yet edgy sensibility reflected in the innovatively crafted surface texturing techniques as a key feature of the collection. These aesthetics have been aptly captured by use of fabrics like leather, suede, organza, textured jute and linen incorporated in the complex creation of exaggerated silhouette structuring.
"My theme for LFW   portrays a tribal Gothic vibe, with dark fantasies of a female’s sub-conscious mind captured in a mystical and dramatic vision".
These aesthetics have been represented through "Power Dressing" by juxtaposing asymmetric silhouette patterns to create illusions of exaggerated layering combined with immaculate workmanship of intensive surface texturing.

Print production technology will continue to evolve, and new...

Kohlâs Corporation, a leading omnichannel retailer in the US, has...