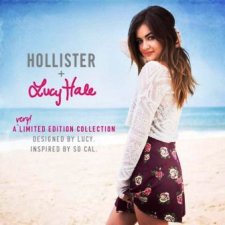 American actress and singer Lucy Hale is all set to launch her first-ever clothing line in collaboration with the Ohio-based lifestyle brand Hollister.
The ABC Family television series Pretty Little Liars’ star has created two limited-edition collections, which include dresses, leggings, skirts and tops, inspired from the laid-back southern Californian lifestyle.
The first line, which is comprised of easy-to-layer colourful pieces, will be unveiled on August 8, 2014 followed by the second range, which includes beach-appropriate separates in relaxed comfy silhouettes, on August 29, 2014.
Started in 2000, Hollister operates through a number of stores in the US, UK, Canada, Germany, Australia and China.
The company is a part of the preppy American retailer Abercrombie & Fitch (A&F) which specializes in a range of casual wear for consumers between the ages of 18 to 22. Founded in 1892, the company has presence in nearly 300 locations across the United States.
A native of Memphis, Tennessee, Hale released her debut single album ‘You Sound Good to Me’ in January 2014.