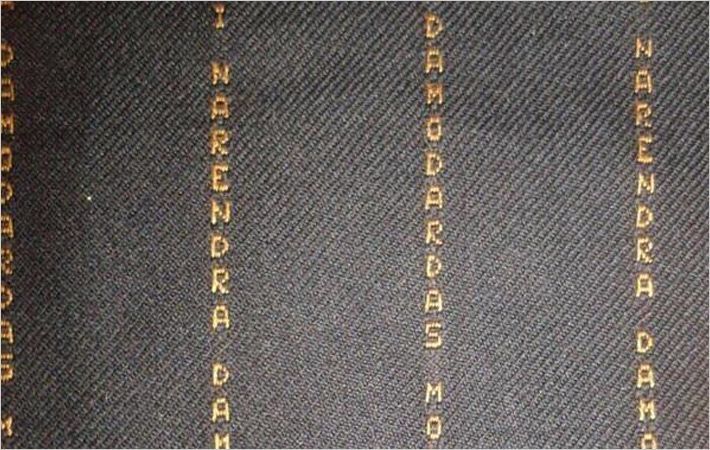 c: theguardian/Harneestin/Twitter
His colourful headgears, fitted kurta pyjamas, richly embroidered shawls and vibrantly hued Nehru jackets have always earned him appreciation from fashion enthusiasts around the world. And now, India's Prime Minister Narendra Modi has again come under the fashion spotlight for wearing a new personalised pinstriped suit at his meeting with US President Barack Obama.

Though the Indian PM’s bespoke attire has managed to grab a lot of attention from several leading global dailies, however the trend of customised apparel has been doing the rounds in the international political circuit for quite some time now. In 2011, former Egyptian President Hosni Mubarak was seen in a similar suit bearing his name on the pinstripes.

In this age, where demand for innovative styles of personalised clothing is rapidly gaining momentum, will the new name-inscribed pinstripe suit turn out to be a next trend for us to follow in future, ask fashion enthusiasts.

Of course, it is too early to predict any thing, but there is a possibility that it may become a trend. For example, mothers asking costumers to make dresses for their children with names inscribed on them, just like they do it for birthday cakes. Even schools can have names of students on their indivudual uniforms. Possibilites are immense, but only time will tell whether the trend will pick up. (PB)