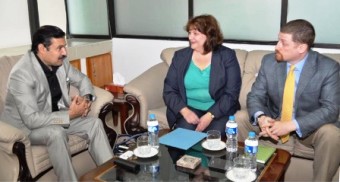 Mr. Afridi (left) with Ms. McFee (centre)
Implementation of international labour standards in Pakistan, especially in the textile industry, was discussed in detail when US Deputy Counselor for Economic Affairs Susan McFee called on Pakistan’s Minister for Textile Industry Abbas Khan Afridi.
The US Deputy Counselor said Pakistan is not the only country that is adversely affected by the labour standards certification, according to a statement from the Ministry of Textile Industry.
Ms. McFee suggested that Pakistan should immediately come up with a comprehensive strategy on labour standards in order to meet the International Labour Organization (ILO) requirements.
Mr. Afridi stated that his Ministry is already in consultation with the Ministries of Commerce and Finance on framing a policy regarding labour standards. He added that the Government would soon finalize a comprehensive labour policy in collaboration with the provincial governments.
During the meeting, the Minister also raised the issue of ban by the US-based firm Walt Disney on textile imports from Pakistan and expressed hope that the company would provide some waiver, as Pakistan is working diligently on labour issues. He added that in the upcoming textile policy special emphasis would be laid on the implementation of labour standards in the textile industry.
The US Deputy Counselor mentioned that Pakistani textiles are preferred by the American companies and added that the US would support the measures by the Government of Pakistan towards compliance with ILO standards.
In the first three quarters of Pakistani fiscal year 2013-14 that began on July 1, the exports of textiles and apparel increased by 7.99 percent year-on-year to US$ 10.384 billion, with the US, the UK, China, Germany and Bangladesh being the top five destinations.
During last fiscal year which ended on June 30, 2013, textile and clothing exports from Pakistan grew by 5.9 percent to $13.06 billion from $12.34 billion in 2011-12.