Bodies of Americans have changed over the years: Avalution 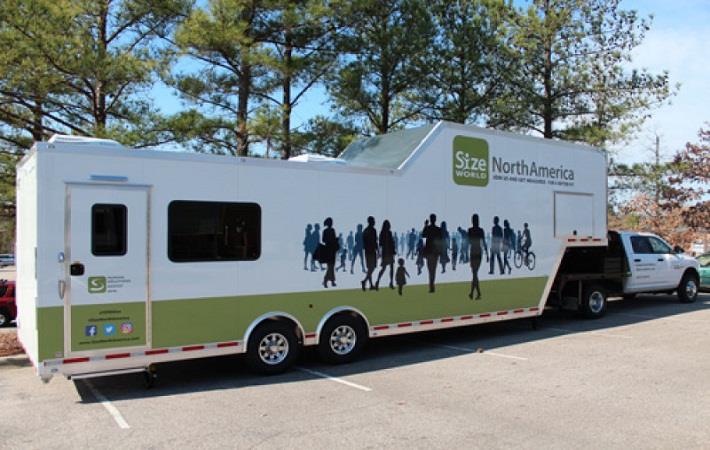 Pic: Avalution
German company Avalution presented the results of Size NorthAmerica for the first time at Texprocess 2019 held at Frankfurt, Germany recently. It was the most comprehensive representative measurement survey ever carried out with 3D body scanners and the results provide up-to-date information on how the bodies of US Americans have changed over the past years.

In US, body measurements of around 14,000 people including men, women and children, were acquired and evaluated. The test persons were scanned with 3D body scanners in different postures to record their body measurements and proportions and their socio-demographic data was also acquired. The survey concluded that the population of US has changed – body height growth is slowing, while body circumferences are increasing. Significant differences can be seen between urban and rural populations, and between populations of different ethnic origins, said Avalution in a press release.

Apart from the actual body dimensions, Americans have the highest average for BMI and it clearly illustrates the challenges that the American market poses for apparel companies. This means that the proportion of overweight people in the US is significantly higher than in other nations. At the same time, however, there is a very broad spectrum of differing BMIs – in the Western US, for example, the BMI is significantly lower than in the Midwest.

German company Avalution presented the results of Size NorthAmerica for the first time at Texprocess 2019 held at Frankfurt, Germany recently. It was the most comprehensive representative measurement survey ever carried out with 3D body scanners and the results provide up-to-date information on how the bodies of US Americans have changed over the past years.#

“Size NorthAmerica confirms the impression that the body dimensions and proportions of the US population have changed noticeably in recent decades, as has the demographic structure,” said Michael Stöhr, managing director of Avalution. “Anthropometric data and the standard size tables were based on earlier data and could only help the apparel industry in a limited way. This Size NorthAmerica survey provides brand new and highly detailed information about specific target groups and market potential, data that has never been available in the past. All this data will now be transferred to our online portal, so fashion companies can filter and evaluate the data to match their own special requirements.”

As US is a typical immigration country, the population is correspondingly heterogeneous which poses a challenge to the clothing industry. “Our experience with country-specific measurement surveys has shown clear differences in body dimensions in different countries. Especially in a country like the US, where many people of different ethnic origins live, it’s important to have access to a valid database for product development,” said Stöhr. “The differences between the population groups are often very clear – depending on the population group, size differences of 4 to 5 centimeters in average body height and up to 15 centimeters in average chest circumference were determined.”

The survey also concluded that German clothing sizes are not suitable for the US market. Collections developed for the German market must be adapted to the body dimensions of the US population. The average body heights of the German size tables for men and women are higher than those of the US and German waist circumferences are generally too small.

Next Avalution will conduct the Canadian version of the survey in Canada which will be finished by September 2019. The final results will be available by the end of the year. (PC)