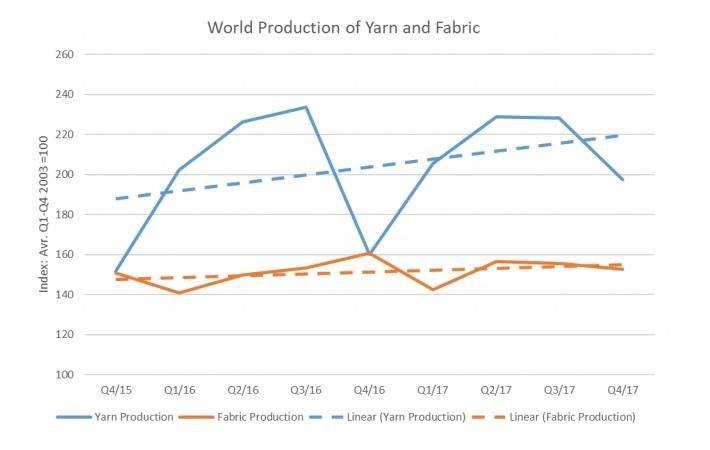 Courtesy: ITMF
Global yarn production decreased by 23 per cent between Q3 of 2017 and Q4 of 2017, while yarn orders increased by around 7 per cent during the same period, the International Textile Manufacturers Federation (ITMF) said in its ‘State of Trade Report Q4, 2017’. The quarter saw fabric orders dropping by 23 per cent leading to a growth in stock.

Global Yarn orders increased on average 7 per cent between Q3 and Q4 of 2017. The 8 per cent order contraction in South Korea was compensated by positive trends in the other reporting countries.

Global fabric production decreased by 2 per cent during the quarter under review. “A respective 12 per cent and 2 per cent contraction in Brazil and Asia drove the world average in the negative range. Fabric output, however, increased by 6 per cent and 10 per cent in Africa and Europe respectively. The world output level reached 95 per cent of its Q4 2016 level. Europe and Brazil are expected to increase production in Q1 2018,” the report said.

On average, fabric orders fell by 23 per cent between Q3 2017 and Q4 2017 in the countries under review. The growth of 11 per cent and 2 per cent in Egypt and Europe was not sufficient to compensate for the 31 per cent reduction in Brazil. The global index for fabric orders decreased by 3 per cent since Q4 2016.

In Q4 2017, the global fabric stock level grew by 3 per cent. This increase was driven by Brazil (+15 per cent) and brought the index of fabrics stocks 3 per cent above the Q4 2016 level. In 2017, stocks have been stable in Asia and the US. They increased steadily in Europe and Brazil and constantly decreased in Egypt. (RKS)