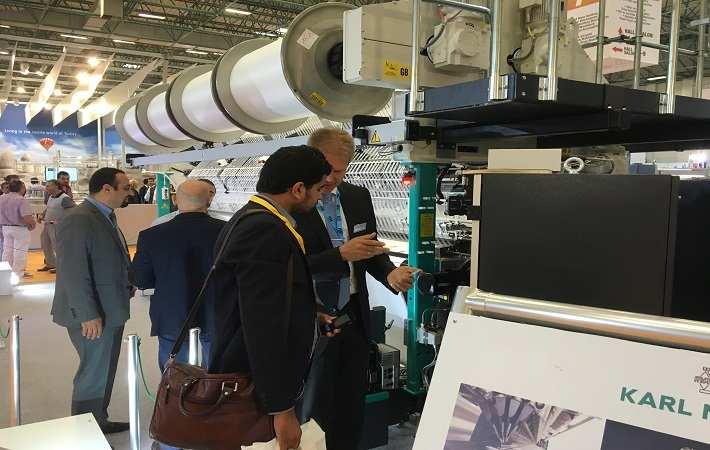 HKS 4-M EL, the machine from Karl Mayer's Warp Knitting Business Unit, was on display at the recently concluded ITM fair in Istanbul, Turkey.
Â
On display at the expo, the new high-speed tricot machine was producing a range of structured upholstery fabrics, and was demonstrating its impressive speed and patterning flexibility, which generated interest among visitors.
Â
The pieces in the fashion collection on show also proved to be a real magnet for the visitors. Lace with an embroidered look, produced on an MLF 46/24, was showed in a skirt/top ensemble, and an outfit consisting of trousers and a jacket containing the lace produced on a JL 65/1 B fashion machine featuring bourdon cord was also on display at the Karl Mayer booth.
Â
There were enquiries from apparel and home textiles companies about processing thick bourdon yarns, according to sales manager Bastian Fritsch. He also had many conversations on the patterning possibilities of the Jacquardtronic Lace machine, and noticed a growing interest in loop plush and raised fabrics. There were also numerous questions on the applications of double-bar raschel machines, particularly for producing shoe fabrics and women's outerwear, Karl Mayer said.
Â
In the warp preparation sector, the innovative size box VSB is the core of the Prosize sizing machine, and attracted the attention of many visitors. Although there were slightly fewer visitors than had been expected, but they came to discuss specific issues. âThe calibre of the contacts was extremely high,â said head of sales for Karl Mayer's warp preparation machines.Â
Â
New projects were initiated during the course of the conversations, and current projects on the different applications and machines in Karl Mayer's product portfolio were discussed. The main topics of the conversations were technical systems for manufacturers operating in the denim sector. In addition, the visitors were impressed by the efficient operations of the VSB sizing unit.Â
Â
Karl Mayer Connect app was demonstrated live on the HKS 4-M show, which received positive feedback from visitors who grasped the functions and uses of the app straightaway.
Â
In addition to its main Turkish clients, Karl Mayer welcomed many visitors from Iran. Another large group of visitors came from North Africa, mainly from Egypt, Algeria, Morocco, Tunisia and Ethiopia. On the whole, however, the significance of the ITM fair was mainly regional, Karl Mayer said. (RKS)
Â