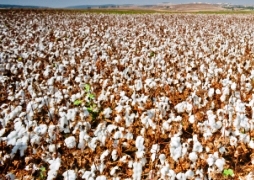 The prices at which cotton is sold in Ethiopian markets is comparatively lesser than the rates quoted in international markets.
In March this year, cotton was sold at US$ 3.95 a kilo in international markets, whereas the local growers in Ethiopia were selling it for 47 Ethiopian Birr (approx. US$ 2.49).
The lower price offered to Ethiopian farmers is affecting the country’s cotton production, according to an AddisFortune report.
Ethiopia is currently expecting only 80,000 tons of production of cotton in the next season from 125,000 hectares of land, despite having an estimated demand of 95,287 tons of cotton.
Ethiopia currently has an estimated 2.6 million hectares of land which is suitable for cotton production, but the demand and supply of cotton has been at odds in the country since 2009.
In 2009, Ethiopia’s total national output of cotton was 21,000 tons, the lowest ever, and the total area harvested was 42,371 hectares, whereas, the demand for cotton was 45,000 tons which was more than twice the supply of cotton.
In November 2010, the Government of Ethiopia banned the export of cotton from the country, promising the growers that they would still be able to sell their cotton at an international rate of 42.78 Birr a kilo. But the Government lifted the ban when the surplus production piled up.
However, the lifting of the ban did not lead to bigger exports as the Government imposed stringent requirements and procedures to be followed for exporting cotton to protect the local textile factories, but ended up affecting the cotton producers.
In the fiscal year of 2010/11 the country produced 51,000 tons of cotton falling short of the demand for cotton in the same year by 3000 tons, whereas in the following year 2011/2012 the production stood at 78,000 tons.