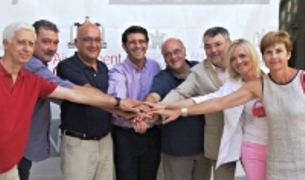 The Municipality of Ontinyent in Valencia, Spain, recently signed a Joint Declaration between employers and unions for the revival of the textile industry in the region.
The agreement was signed between the Ontinyent City Council, Federation of Textiles-Leather industries and Chemical (FITEQA-CCOO), General Workers’ trade unions (UGT) and the employers of Textile Entrepreneurs Association of Valencia (ATEVAL).
The aim of the agreement is to regain the position of the textile sector as the driving force behind all the economic activity, wealth creation and generation of jobs in the region.
Jorge Rodriguez, Mayor of Ontinyent, said the agreement is defined as a common cry for help by everyone especially for those who are in need of the textile industry.
It is very important to connect the agreement directly with the multi-company garment project linked with the textile sector, launched recently by ASEPRI, in Valencia, he added.
Ramon Soler, the regional Chairman of ATEVAL-Albaida Valley, said it is necessary to vindicate the sector and the effort of the agreement is to re-industrialize the sector and make it powerful in terms of quality as well as productivity.
Vincente Rodriguez Jara, Secretary General of FITEQA-CCOO, said the agreement could be defined as the ultimate expression of social dialogue, signed for maintaining and promoting competitiveness in the textiles sector.
Last month, The Spanish Association of Products for Children (ASEPRI) launched its first major multi-company garment project in Ontinyent.