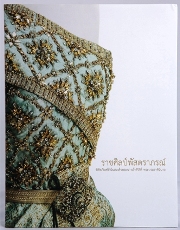 As an effort to honour Her Majesty Queen Sirikit’s efforts to promote Thai textiles, The Queen Sirikit Museum of Textile (QSMT) located on the grounds of the Grand Palace, Bangkok, Thailand, has recently unveiled an English version of “In Royal Fashion: The Style of Queen Sirikit of Thailand”.
Released as part of the museum’s activities to honour the Queen on her 81st Birth anniversary, the book contains stories regarding the dressing of Thai women during the Rattanakosin era and also talks about the Queen’s talent in designing contemporary Thai-style dresses intermingled with values of historical garments.
Available in Thai and now also in English, the book also highlights the royal initiatives by the Queen for promotion of local handicrafts and Thai textiles.
QSMT would also be organizing a conference titled ‘Textile and Royal Costumes in Thai Court’ at the museum, as an additional effort to honour the Queen for her determination and philanthropy for conserving Thai textiles and her efforts to enhance the popularity of Thai textiles, at home and abroad.
Alongside the conference, the museum would expand its range of royal costumes on show with addition of nine more costumes, including pieces like the Thai Dusit-style dress and other dresses donned by the Queen at different royal functions.
The museum is also hosting an expo titled ‘Artistry in Silk: The Royal Style of Her Majesty Queen Sirikit’ featuring over 12 designer pieces created from hand-woven textiles made by members of Support, a charity run by the Queen with an aim of preserving Thai village weaving.
The museum that officially opened in May last year, collects, displays and preserves textiles from Southeast, East and South Asia, with a special focus on presenting the couture wardrobe of Queen Sirikit and textile heritage of Thailand.
QSMT has also extended cooperation for organizing “Tor Fah Pha Thai”, a reality show dedicated to finding out new talent from Thai design industry.
The museum would also host an international multi-disciplinary symposium from November 6-9, 2013, allowing an opportunity for people to view behind the scenes and private textile collections, not open to general public.
The symposium would focus on topics like Indian, Chinese and Cambodian textiles at the Thai court; a late 19th-century royal collection of Indonesian batik recently discovered in the Grand Palace Inner Court; Thai influence on Burmese royal dress; textile tribute between the courts of mainland Southeast Asia; fashion design for modern royalty; and the history and costuming of Khon.