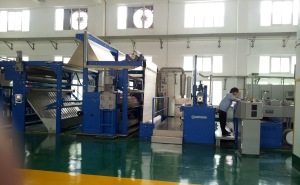 In 2010 and 2011, BRÜCKNER sold four HT (high temperature) stenters for filtration material in the Chinese market (one of them ordered from Germany).

With this result, half of the market leaders in China in the high temperature filtration field are using now BRÜCKNER HT stenters, five customers own in total six ma-chines, namely BWF, Andrew, Savings, Xinhua and Jihua 3521, and the total annual turnover reaches 65-70% of China’s complete output of this market segment.

The complete value of filtration material produced in China was in 2012 close to five billion RMB, which means a 50% increase compared to 2011. According to the forecasts, the increase of this year (2013) would be again more than 50 %.

Most of these HT stenters comprise web inlet, padder, vacuum dewatering, (coat-ing unit only used by some customers, knife over air and knife over cylinder), stenter (always with pin-chain carrying), cooling zone, calender (by some customers but not all), and an exit with a batcher.

The working width is 2400 to 2600 mm, with six compartment dryer (two machines have eight compartments), with direct gas heating, most of the products range from 300 to 700 g/m2 weight, the mechanical speed is 2 – 40 m/min, the temperature goes up to 320°C, the machines include PLC control and are equipped with an additional web temperature measuring system.

Savings, Xinhua and Jihua 3521 are local companies and before they decided to buy Brueckner HT stenters, they all made several years of market investigation and research and also detail comparison with other kinds of finishing machinery for non-wovens, such as drum dryers.

Arguments and advantages in favour of the Brueckner HT stenter:

(a)  With the stenter unit nonwovens can be reliably and reproducibly stretched or shrunk crosswise and the characteristics in lengthwise and crosswise direction can be influenced selectively.

(b) The stenter comprises several modules of 1500 mm length; each of these 1500 mm long sections is provided with the SPLIT-FLOW air circulation system patented by BRÜCKNER; this system uses two inverter-controlled circulating air fans, the speed of which can be set independently of each other; one fan supplies air exclusively to the lower nozzle fingers, the other exclusively to the upper nozzle fingers; the circulating air flows from below and above against the web.

(c) Due to the optimum arrangement of burner, fan and nozzle finger (long dis-tances), the VenturiJet Technology patented by BRÜCKNER and the countered arrangement of the individual heating sections, the circulating air is extremely well mixed and guarantees thus a very uniform temperature admission to the material web.