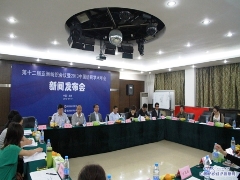 courtesy: ctei.gov.cn
The 12th Asian Textile Conference (ATC-12) will be held in Shanghai, China from October 23-26, 2013.
ATC is one of the world’s leading conferences in the field of textiles and takes place once in two years at one of the Asian countries.
ATC-11 was held in South Korea in 2011, and ATC-12 will be the first time that the conference would be held in China.
The China Textile Engineering Society would be organizing the conference with the main theme being ‘New Prospects on Textiles’.
At a press conference in Beijing, held in connection with ATC-12, China Textile Industry Association vice president Sun Rui Zhe said that at present China is the leading textile producer in the world and the country will also become the most important world market, and in both roles it will attract worldwide attention.
He said ATC-12 would actually be a world textile conference, as it will attract the world’s textile and academic experts, according to ctei.gov.cn
The conference would be an international platform where Chinese enterprises would get a chance to understand the latest world’s cutting-edge technology, while also demonstrating their ability to innovate.
Textile industry experts from the US, the UK, Australia, Japan and other countries will be presenting their papers during the four-day event.