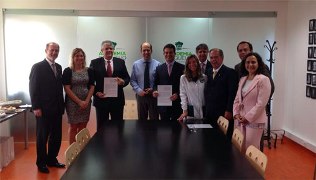 The Secretariat of Agriculture (SEAGRI) of the eastern Brazilian state of Bahia has signed a memorandum of understanding (MoU) with the Commercial and Industrial Association of Barcelos (ACIB), in the North of Portugal, to promote the establishment of industries in the Portuguese region, including textiles.
According to a statement issued by SEAGRI, the agreement was signed with ACIB at the Portuguese National Congress in the capital city of Lisbon, during a recent visit by SEAGRI members to Portugal.
Eduardo Salles, secretary of SEAGRI, said the construction of industries will be concentrated in the textile sector along with other segments that are complementary to the sector such as accessories and textile machinery.
The goal is to create a large textile industry in Barcelos to add value to cotton as well as to create more direct and indirect jobs, he added.
Mr. Salles said the main objective is creating an integrated textile and apparel chain of industries, from producing yarn to making clothes.
Bahia is the second largest producer of high quality cotton, which is as good as those produced in Egypt, he added.
Mr. Salles explained that many textile industries in Portugal are shutting down their production activities owing to the economic crisis that has affected the European market, and this agreement aims to promote the textile sector through establishment of industries in Portugal.