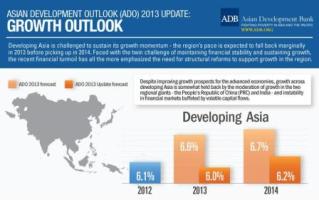 The Asian Development Bank (ADB) has downwardly revised its 2013 gross domestic product (GDP) growth forecast for the Asia-Pacific region to 6 percent from 6.6 percent seen in April.
In an update of its annual publication ‘Asian Development Outlook 2013’ (ADO 2013), ADB has also revised down its 2014 growth projection for the region to 6.2 percent from 6.7 percent in April. In 2012, growth came in at 6.1 percent.
“Asia and the Pacific 2013 growth will come in below earlier projections due to more moderate activity in the region’s two largest economies—China and India—and effects of the US quantitative easing (QE) nervousness,” said ADB Chief Economist Changyong Rhee, in a press release.
“While economic activity will edge back up in 2014, current conditions highlight the need for the region to exercise vigilance to safeguard financial stability in the short term while accelerating structural reforms to sustain economic growth in the longer term,” he added.
The report states that slowing growth highlights the need to push ahead with overdue reforms in areas like foreign direct investment, infrastructure development, fiscal consolidation and social protection programs, to sustain growth for the long term.
Growth in East Asia is now expected to come in at 6.6 percent for both 2013 and 2014, while in South Asia, GDP is seen to expand by 4.7 percent in 2013 and 5.5 percent in 2014, well below previous projections of 5.7 percent and 6.2 percent, says the statement.
For Southeast Asia, the growth is projected at 4.9 percent in 2013, with the pace set to quicken to 5.3 percent in 2014. However, Philippines is expected to continue to perform strongly.
Meanwhile, Central Asia will see growth decelerate to 5.4 percent in 2013 on slower-than-expected economic activity in Kazakhstan and Georgia, before recovering to 6.0 percent in 2014.
The Pacific sub-region, covering Fiji, Cook Islands, Kiribati, Nauru, Solomon Islands and Timor-Leste, will post growth of 5.2 percent and 5.5 percent in 2013 and 2014, unchanged from the April ADO 2013 estimates.