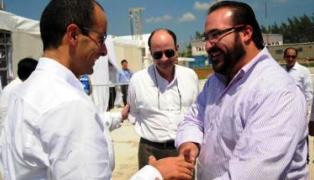 Marcelo Odebrecht (L); Javier Duarte (R)
The Mexican state of Veracruz would receive investments of over US$ 5 billion in the coming months for the development of the petrochemical cluster in the south of the state, announced Veracruz’s Governor Javier Duarte De Ocha, during a meeting to discuss the progress of the Ethylene XXI century complex, which is being constructed in the state.
According to a statement issued by the government of Veracruz, the state would be receiving the US$ 5 billion as part of investments of over US$ 11 billion from different private companies for development purposes in the region, especially in the petrochemical sector.
The largest contribution comes from the Brazilian consortium Odebrecht which has announced an investment of US$ 8 billion in various sectors of the region, including petrochemical and ethanol.
The investment by the Brazilian group would be one of the biggest in the world and in addition to the earlier US$ 3.5 billion it invested through its subsidiary Braskem and Mexican Idesa for the construction of the Ethylene XXI century complex in Veracruz, which would employ 10,000 people on completion.
The Mexican state-owned petroleum company, Petroleos Mexicanos (PEMEX), has also announced an investment of US$ 300 million in Veracruz’s petrochemical sector.
The Governor said that these are historic investments which will generate thousands of jobs in the state and lead to better welfare of the families in the region.
The fact that such big national and international firms want to invest in Veracruz is a testimonial that these firms trust the state and the government, he added.
The petrochemical complex Ethylene XXI Century will produce one million tons per year of ethylene and polyethylene (high and low density), and primary materials for various industries including textiles. The petrochemical complex is scheduled to begin operations by the second half of 2015.