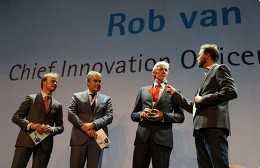 Royal DSM, the Life Sciences and Materials Sciences company, is proud to announce that DSM Chief Innovation Officer Rob van Leen has been named 'Innovator of the Year' by Accenture.

Rob van Leen is Chief Innovation Officer at DSM and is responsible for the company’s global innovation agenda. Rob is also active in a range of national and international organizations which promote and provide impetus to science and innovation and is the chairman of the topteam for the economic topsector Life Sciences & Health in The Netherlands.

This year, the award was presented for the first time to the person ‘who has made an extraordinary contribution to innovation in The Netherlands over the past few years’. Rob received his award during the Accenture Innovation Event, which was held in Amsterdam on 8 November.

"We are proud that our innovative activities are receiving recognition,” says DSM’s Rob van Leen. “Within DSM, we have thousands of people working on our innovations throughout the world. Together we are constantly improving our innovation processes and achieving the goals we’ve set ourselves.

In addition to this, it has been of crucial importance that our Board of Directors continued to invest in innovation even in times of crisis, ensuring that we continue to differentiate ourselves  and create more value for all stakeholders as a result. The fact that I’m able to receive this prize as the head of this discipline within DSM is an acknowledgement of the success of the entire organization.”

“In the Netherlands we make full use of the opportunities offered by new technologies, crowdfunding and open innovation,” says Mark Davids, Managing Director of Accenture.

“Our country is bursting with start-ups and entrepreneurs. At the same time, the Netherlands is home to many multinational organizations. And it’s the innovations made by these companies that can impact rapidly on a global scale.

“As well as the start-ups, praise should also go to those individuals within larger organizations who are capable of making innovation a priority for the organization, who are able to manage innovation as an integral process and who know how to carry on developing distinctive products and new businesses.

“Rob van Leen has instilled innovation into DSM’s DNA and has developed an innovation model which has led to a transformation of the organization. This is why Van Leen is an inspiration to many large organizations. On behalf of Accenture, I would like to congratulate Rob on his Innovator of the Year award.”

Rob van Leen obtained his PhD in molecular biology and has an MBA from the University of Nijenrode. He started work at DSM (Gist-Brocades) in 1987. In 2006, he was appointed Chief Innovation Officer of DSM, taking charge of the DSM Innovation Center and playing a crucial role in expanding DSM’s innovative power within all the business units.

He also created so-called Emerging Business Areas (EBA) within the Innovation Center, where new business areas are developed outside the scope of the current businesses of DSM. The Innovation Center develops a pipeline of innovation platforms which have the potential to develop into future EBAs. DSM’s current EBAs are geared toward biomedical materials, the production of energy and raw materials from plant waste and solar energy.