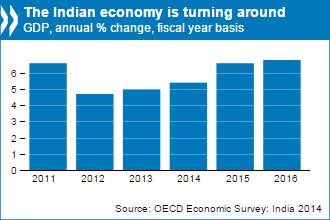 The Indian economy is showing signs of a turnaround, according to the Organisation for Economic Co-operation and Development (OECD).  However, new reforms, some of which are introduced by Prime Minister Narendra Modi, need to be implemented to put the country on a path to strong, sustainable and inclusive growth, OECD says in its latest Economic Survey of India.
The Survey notes that the Indian economy slowed more than many other countries since 2011, but it is now recovering faster. It predicts India’s GDP to grow by more than 6.5 per cent annually in the coming years.
Investment and exports are driving the rebound of the Indian economy, but growth will be sustained at a stronger pace if further steps are taken. According to the Survey, in the near term, stable and lower inflation and smaller deficits are needed. For mid-term growth, structural improvements to the business climate are crucial, whereas in the longer-term, health improvements and increased female participation in the labour market are needed for sustaining strong and inclusive growth.
“The Indian economy is coming out of some tough times in recent years, with a steep decline in growth, stubbornly high inflation and a wide current account deficit, but the situation is now improving,” said OECD chief economist Catherine L Mann, who presented the Survey in New Delhi along with Arvind Subramanian, chief economic adviser to the Government of India.
Mann said, “Key reforms in the business environment, to labour markets and to infrastructure will bring economic growth back to the higher levels seen in the recent past, create good jobs and improve well-being for all Indians.”
Identifying policies critical for future growth of the Indian economy, the OECD says the country should adopt a flexible inflation-targeting framework, which will help contain inflation expectations and provide support for saving and investment. It also suggests implementing a broad national value-added tax (GST) and cutting energy subsidies, as part of wider efforts to put public finances on a stronger footing.
The Survey draws attention to the long-term challenges facing India, notably the need to create better-quality jobs for those currently working in the informal sector, and to provide employment for the massive influx of young people into the labour force over the coming decades.
It also mentions that reducing barriers to manufacturing growth, which has contributed relatively little to growth of GDP or exports, will be critical in the future development of the Indian economy. (RKS)