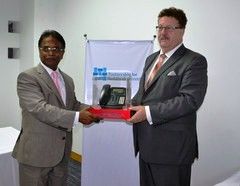 Shipar(L)&Fuchtel/c: German Embassy Dhaka
German parliamentary state secretary to the federal minister for economic cooperation and development, Hans-Joachim Fuchtel, promoted ‘Partnership for Sustainable Textiles’ during his three-day visit to Bangladesh this week.
‘Partnership for Sustainable Textiles’, initiated by the German minister for economic cooperation and development Gerd Müller, aims at social, environmental and economic improvements in Bangladesh’s readymade garment (RMG) sector.
During the visit of Fuchtel, four Bangladeshi RMG companies, namely DBL Group, Niagara Textiles Ltd, Saiham Knit Composite Ltd and JMS Holdings, signed the Declaration of Accession on the ‘Partnership for Sustainable Textiles’.
The four companies, which have a combined annual turnover of €580 million and employ 35,000 workers, have already been collaborating with GIZ, the German development agency and KfW, the German development bank, for many years to improve their social and environmental standards.
At the signing ceremony Fuchtel underlined, “We strongly believe that these good examples will be followed by many more soon.” He added that the federal ministry for economic cooperation and development has already invested €10 million in the ‘Partnership for Sustainable Textiles’ and promises additional funds of €6 million.”
At the event, Fuchtel also introduced ‘Labourline’ – a labour dispute settlement helpline, which provides information on labour-related issues and address shortcomings in resolving labour disputes. The helpline will support factory workers by settling disputes with owners and managers to ensure their rights. Fuchtel presented a symbolic Labourline to Mikail Shipar, secretary, ministry of labour and employment, Government of Bangladesh. (RKS)