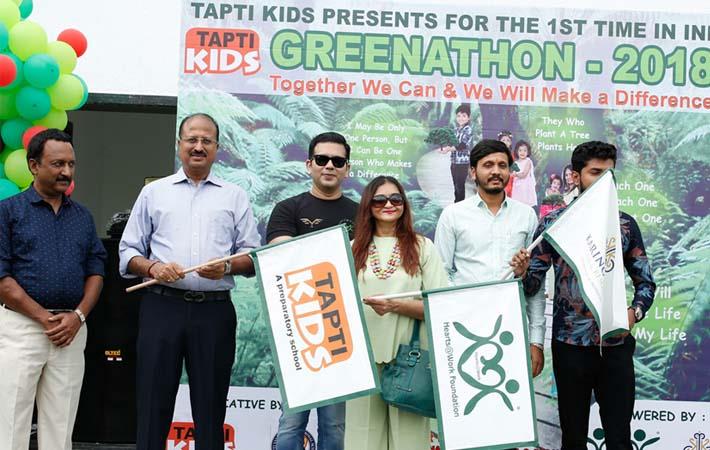 Greenathon 2018 was organised successfully in Surat by Hearts@Work Foundation, an initiative by Viral Desai, the chief executive officer of Surat-based textile firm Zenitex, earlier this month. The sustainable programme was aimed to spread awareness among the people about the tree plantation and the harmful effects of the increasing pollution.

"The main objective of this event was to pass on the message, the responsibility and spread awareness to the next generation, so that we all can be assured of a green future and save mother earth from going barren," said Desai who is associated with many educational institutions, orphanages and charitable organisations and has been instrumental for many tree plantation drives at various places including Sarthana Nature Park, Yatimkhana, nearby villages of Navsari, Maroli and many other places.

The drive organised in association with Tapti Kids and Karington Club saw participation of mothers, toddlers, kids and expecting mothers. "As many as 350 trees and plants were planted during the pre-launch of the Greenathon, 662 plants were given to each participant. The total number of people present at the drive including the volunteers, guests and teachers were 1,004, we have pledged to plant a tree for each one of them," Zenitex in a press release.

"Nowadays the pollution level is rising rapidly and oxygen level in the air diminishing in the environment, thus, for maintaining the oxygen level in environment in future, the Greenathon 2018 was organised," said Pramod Chaudhary of Tapti Kids.

Desai known as the 'Green Man' has also won several accolades in the field of environment protection. He is known for his awareness drives and massive tree plantations done in past few years through Hearts@Work Foundation.

"In the modern era when we are busy in calculating progress by the means of GDPs, productivity growth and industrialisation, such an event provides the much needed inspiration for the society to build a pollution-free and healthy environment for the future generation," the release added. (RR)

Greenathon 2018 was organised successfully in Surat by Hearts@Work Foundation, an initiative by Viral Desai, the chief executive officer of Surat-based textile firm Zenitex, earlier this month. The sustainable programme was aimed to spread awareness among the people about the tree plantation and the harmful effects of the increasing pollution.
More Textiles News - India...