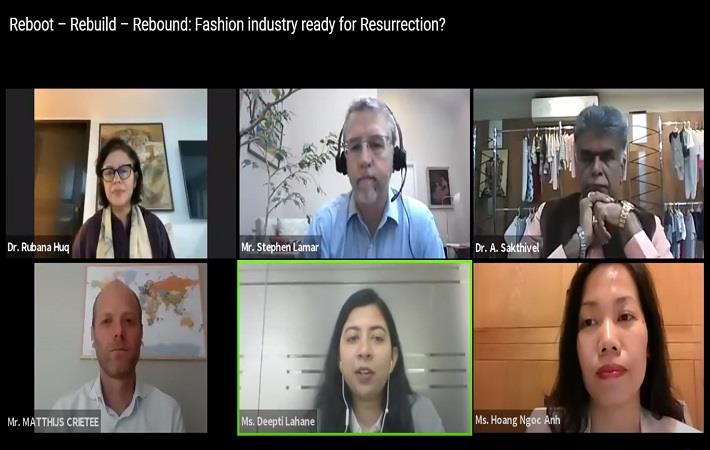 Pic: Fibre2Fashion
For resurrection of the textile-apparel industry post-COVID-19 pandemic, stakeholders of the Indian and Bangladesh textile industry have mooted the idea of greater collaboration between the industries of the two countries. A textile-apparel regional hub would play a vital role in marketing to the European countries, they said during a panel discussion organised by Fibre2Fashion.

"Collaboration is the only way forward. There is no alternative to collaboration," said Bangladesh Garment Manufacturers and Exporters Association (BGMEA) president Rubana Huq while emphasising on collaboration between the textile-apparel industries of India and Bangladesh during the virtual panel discussion 'Reboot – Rebuild – Rebound: Fashion industry ready for Resurrection?'

Agreeing to the idea, A Sakthivel, chairman of India's Apparel Export Promotion Council (AEPC) said, "Regional cooperation is a must. It will play a vital role in marketing to Europe." He added that virtual fairs and virtual marketing should also be held in both India and Bangladesh.

Participating in the discussion, Stephen Lamar, president & CEO, American Apparel & Footwear Association (AAFA), welcomed the idea of creating a regional hub between India and Bangladesh for textile and apparel.

Stressing on digitisation, he said: "COVID-19 has taught us that digitisation is going to be very important. If you are not using technology actively, you are going to fall behind."

Explaining that buyer-supplier synergy is one of the biggest problems in the industry, he said, "Products are made which are not bought. Then those products are sold at a discount. We cannot have sustainability if there is over production and supply-demand mismatch. So, industry has to become smarter by teaching middle management with knowledge, installing systems, and conducting a lot more trainings in the industry."

According to Crietee, normally no industry produces more and then sells at a discount. The problem of over production in textile-apparel industry must be addressed and the industry should become 'normal' like other industries.

Hoang Ngoc Anh, acting general secretary of the Vietnam Textile and Apparel Association (VITAS), said ensuring continued employment of workers, sustainable development, and adjusting the supply chain are important. In view of the Comprehensive and Progressive Agreement for Trans-Pacific Partnership (CPTPP) and the EU-Vietnam Free Trade Agreement (EVFTA), she said the Vietnamese government needs to focus on garment industry development planning, and allow investment in dyeing, sewing, etc to maximise benefits from these agreements. She added that more cooperation and collaboration should be facilitated with governments of other Asian countries.

Arguing for a balanced approach in automation, Huq said the Bangladesh garment industry employs 4.1 million workers, who are dependent on the industry for their livelihood. "Since next-gen takes shopping as an experience, we need to insert a lot of humanism. The story of workers, the story of livelihood needs to be told. Let's adapt a more better and human strategy, while we move on with automation."

Stating that the pandemic has brought a lot of thinking in the industry, Sakthivel said the industry has started working on strengthening sportswear and activewear, and after the crisis is over, India will be one of the largest producers of manmade fibre (MMF) products. India is presently mainly a supplier of summer/cotton products, and it is now time to diversify and be able to supply products throughout the year for all seasons.

Indian textile-industry has good backward linkage, but it lacks in economies of scale, he said. However, since Indian apparel industry is already producing with zero pollution, it has a good future as the younger generation wants to buy eco-friendly clothing.

"Trust and partnership has taken a beating on the supply chain over the last couple of months," said Lamar. So, companies who want to be successful in the 'new normal', would have to do a lot of work. "The supply chain is going through a lot of changes; we will see an acceleration of diversification out of China. There might be a renewed rhetoric of the trade war." But, he quickly added, "a lot of services will remain in China, if not for any other reason, China is a big market itself."

On the question of sustainability, he said, "We have a chance of changing the footprint, and we have to ensure that new investments in Vietnam are done in a sustainable manner."

Putting across her point, Huq said, "The kind of fast-fashion consumption that was there earlier is not going to be back, and there will be a drop in consumption." To avoid reflecting the same on livelihood of workers, prices should go up. "What we are seeing in Asia should be transmitted to the whole world. We have more than 100 factories that are LEED certified, and we have more than 25 factories that are Platinum. It will be worthwhile for us to collaborate regionally and come out with a win-win situation."

Crietee added the LEED tag tells a good story, but "we do not have something like that to put on a clothing product."