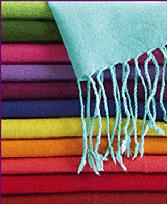 The exports of textiles and apparel from Pakistan increased by 8.28 percent year-on-year in the first eight months of the financial year 2013-14 that began on July 1, according to the data released by the Pakistan Bureau of Statistics (PBS).
Pakistan exported textiles and garments worth US$ 9.155 billion in July-February 2013-14, compared to exports of $8.455 billion made during the corresponding period of 2012-13, PBS data showed.
While most of the categories showed improvement, exports of cotton yarn; cotton carded or combed; towels; and tents, canvas & tarpaulin declined during the eight-month period, according to the data.
During the period under review, Pakistan exported 92,386 tons of raw cotton valued at $163.077 million, compared to exports of 64,419 tons of raw cotton worth $108.002 million made during the same period in previous fiscal year, thus registering a sharp increase of 50.99 percent year-on-year.
In terms of value, exports of cotton cloth earned $1.879 billion for Pakistan in foreign exchange during the period, followed by knitwear, bed wear, cotton yarn and woven readymade garments which fetched $1.480 billion, $1.408 billion, $1.376 billion and $1.259 billion, respectively.
Meanwhile, Pakistan’s textile imports increased by 2.92 percent year-on-year to $1.737 billion during July-February 2013-14 period. However, the imports of raw cotton witnessed a sharp 28.68 percent year-on-year decline and were valued at $395.386 million.
In the first eight months of 2013-14, Pakistan imported 141,612 tons of synthetic fibre valued at $278.591 million, while synthetic & artificial silk yarn imports were 154,243 tons valued at $394.216 million.
In February 2014, Pakistan exported textiles and clothing worth $1.131 billion, while it imported goods valued at $276.879 million.
During last fiscal year which ended on June 30, 2013, textile and clothing exports from Pakistan grew by 5.9 percent to $13.06 billion from $12.34 billion in 2011-12.