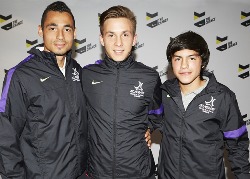 The top three players from Nike’s The Chance Final have been announced in Manchester this evening as the global tour draws to a close; after a six week journey that has seen the 16 finalists experience professional football and elite training at the very highest level.

Marco Di Lauro from Italy, Kevin Salazar from Colombia and Gonzalo Balbi from Spain have been awarded well-deserved places in the Nike Academy, a full-time player academy based in England and supported by the FA Premier League, until the end of the season.

Nike’s The Chance is a unique global talent search that gives amateur footballers the chance to prove themselves on an elite stage and take their game to the next level. More than 100,000 players from 55 countries around the world participated in Nike’s The Chance 2012, culminating in the best 100 participating in a global final at FC Barcelona’s famed youth academy.

The top 16 players from the global finals in Barcelona last summer were invited to attend a global tour, under the watchful eye of Head Coach of Nike's The Chance global tour and Nike Academy Director of Football Jimmy Gilligan, visiting some of the world’s most iconic footballing institutions including Juventus Football Club, Manchester United Football Club, US Soccer and England’s National Football Centre at St George’s Park.

The players kicked off their global tour in January at Nike’s World Headquarters in Oregon, U.S., and went through a series of intense training and elite testing during their first week in preparation for upcoming games. Players were assessed through Nike SPARQ, a training and conditioning system that helps build better athletes.

Next stop was US Soccer in Los Angeles, which saw them enjoy a 4-3 win over USA U-17s, and take in the famous sights of the area including the Hollywood Walk of Fame and Universal Studios.

The tour then continued onto Europe, first stop Juventus Football Club in Turin, which saw the 16 young footballers welcomed to the city by Juventus and Italian international midfielder Claudio Marchisio and academy coach Gianluca Pessotto.

After Italy, the group headed to Manchester United, England, for a week of training and football culture immersion at the club’s Carrington training facility.  There, the final 16 were put through their paces by Brian McClair, former United forward and current club Director of Youth, and Tony Strudwick, Manchester United’s strength and conditioning expert.

Off the pitch, the group were treated to a guided tour of Old Trafford and a meet and greet session with senior squad players Tom Cleverly, Chris Smalling and Danny Welbeck.