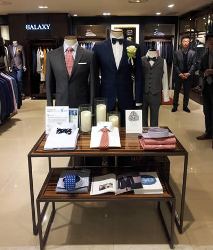 The Woolmark Company’s Cool Wool campaign has relaunched in Korea, after more than one decade’s hiatus.

Now, the consumer campaign in Korea which is part of a global campaign is reaching out to a new generation of consumers, with the global authority on Merino wool teaming up with two leading men’s suits brands and the country’s largest wool apparel retailer.

Men’s suit brands Galaxy and Parkland along with department store Lotte have become Cool Wool campaign partners and will help raise awareness of Merino wool and aim to extend to wool selling season.

The Woolmark Company country manager for Korea, Hyunwon Lee, said although Merino wool remained dominant in the men’s suits market, other fabrics such as cotton, linen and synthetic fibres had rapidly increased in sales due to the warmer weather experiences in spring and summer.

“As part of this consumer campaign we will be targeting retail demand and consumer education of Cool Wool suits and separates,” Mr Lee said. “The Woolmark Company welcomes Galaxy, Parkland and Lotte on board and looks forward to working together to promote Merino wool, particularly in the warmer months.”

Across the country 350 retail stores are displaying Cool Wool banners and other point of sales Cool Wool marketing collateral. Consumers are also being educated on how to care for their Cool Wool purchases, with apparel care gift sets provided to Cool Wool customers.

In addition to consumer education at a retail level, PR and advertising campaigns in traditional and online media is running from April until July to once again increase the exposure of the Cool Wool campaign.

The original Cool Wool program, launched by the International Wool Secretariat nearly 30 years ago and used up until the late-1990s, was very successful. However, the new Cool Wool campaign takes the concept of trans-seasonal apparel even further for the 21st century with even lighter weight fabrics and yarns.

Cool Wool garments are manufactured from lightweight Merino wool fabrics with a maximum weight of 190 g/m² and a maximum mean wool fibre diameter of 22.5 micron. The fabric/garment surface is clean and smooth. Cool Wool fabrics and garments carrying the Woolmark logo are normally 100 per cent Pure New Wool but can include blends of wool with fine animal fibres.