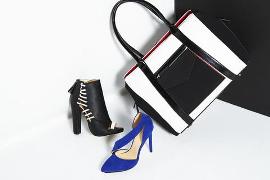 After achieving success as a fashion clothing designer, the popular American singer Gwen Stefani is now set to don a new cap.
The 44-year-old lead singer of the California-based rock band, No Doubt, has collaborated with the online footwear purveyor ShoeDazzle to create a line of accessories.
Based on black, white and red colours, the collection will feature seven handbags and 24 types of footwear, including pumps, wedges and heeled sandals, adorned with pop, tribal, street and punk inspired prints.
In to an interview with WWD, published on her website, the singer stated, “I just wanted to make something that looked really good and high quality, but that you could afford.”
Named as GX, the line is scheduled to be available from February 26, 2014 onwards.
Other than the yet to be released line, the songstress designs for her own Californian clothing label LAMB  (Love Angel Music Baby) and also owns a denim range DWP (which means Design With Purpose) with denim pro Michael Glasser.
Earlier, Gwen and the fellow members of her rock band had created a capsule collection for British streetwear brand Fred Perry in December 2012.
Founded in 2009, ShoeDazzle specializes in a curated selection of shoes, handbags and jewellery.
To connect manufacturers and suppliers with buying houses and fashion brands, Fibre2fashion.com is coming up with an online fair on Leather “Skin Show 2014” scheduled in Mid March-2014.