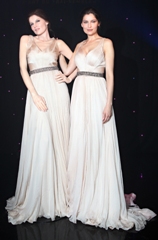 The Paris Grévin Museum unveiled a wax statue dedicated to actress Laetitia Casta.
The dress chosen for the accurate reproduction of the actress was created by Roberto Cavalli, to better represent the glamor, allure and elegance that have always distinguished Laetitia Casta.
The creation of the Florentine designer was worn by Laetitia Casta in occasion of the 64th edition of the International Cannes Film Festival on May 18th, 2011 during the red carpet for the premiere of movie 'La Conquête' by Xavier Durringer.
Description of the gown: the dress is made of light nude silk muslin, with a corset from the deep neckline, highlighted by a handmade drapery with microplisse effect.
The waistline is enhanced by a hematite chain belt and opens into a wide gathered skirt with silk chiffon underskirt.
The Grévin, opened in Paris on June 5th, 1882, is a tribute to the characters of the past and present. Among the most famous wax figures: Napoleon Bonaparte, King Louis XVI along with contemporary actors, singers and athletes such as Lady Gaga, Brad Pitt, Naomi Campbell, Zinedine Zidane and Roberto Benigni.
The statues, imbued with a strong realism, are reproduced in the act of their deeds and the most important of them are represented so as to involve at most the viewer.