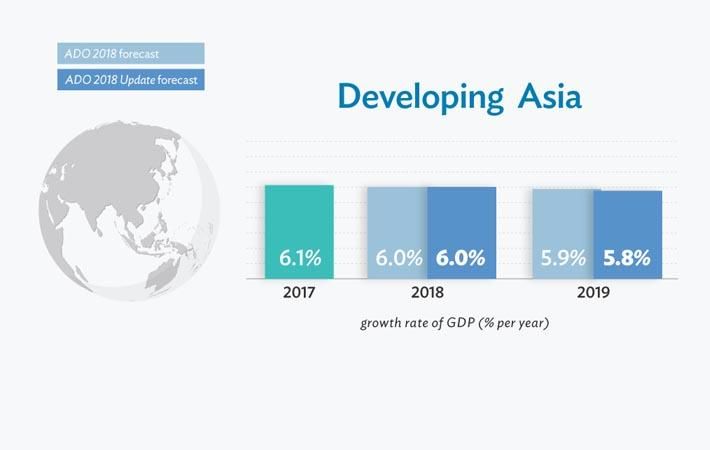 Courtesy: Asian Development Bank
Indian economy is continuing on a robust growth path and its growth forecasts are unchanged at 7.3 per cent for 2018 and 7.6 per cent for 2019, says a new Asian Development Bank (ADB) report. ADB has retained its India forecasts as the temporary effects of demonetisation of large banknotes and introduction of goods and services tax are abating as expected.

The impact of rising oil prices is offset by robust domestic demand in India and rising exports, particularly of manufactures. However, depreciation of the rupee and volatile external financial markets pose challenges, as does accelerating inflation though tighter fiscal policy will help quell inflationary pressures, ADB said in an update of its flagship annual economic publication, Asian Development Outlook (ADO) 2018.

For the Asia region, ADB maintains its forecast that the gross domestic product (GDP) will grow at 6.0 per cent in 2018. The growth forecast for 2019 is trimmed by 0.1 percentage points to 5.8 per cent.

“Growth remains stable across most of developing Asia due to robust domestic demand, buoyant oil and gas prices, and a consolidation of India’s growth rebound. But escalating trade tensions will test the region’s resilience, underscoring the importance of efforts to bolster trade ties among its countries,” says the ADB report.

“Growth in the region has held up to external challenges, helped by strong domestic demand in the People’s Republic of China (PRC) and India,” said ADB chief economist Yasuyuki Sawada. “The biggest risk to continued growth comes from the disruption of international production linkages caused by a further escalation of trade tensions, but Asia’s growth should remain resilient to the direct effects of the trade measures taken to date.”

While strong domestic demand is driving the region’s largest economies, buoyant prices for oil and gas are fuelling growth for energy-exporting countries like Kazakhstan. However, emerging headwinds cast uncertainty on the region’s future growth trajectory. In addition to escalating trade tensions, tightening global liquidity could further cloud prospects over the coming year. (RKS)

Indian economy is continuing on a robust growth path and its growth forecasts are unchanged at 7.3 per cent for 2018 and 7.6 per cent for 2019, says a new Asian Development Bank (ADB) report. ADB has retained its India forecasts as the temporary effects of demonetisation of large banknotes and introduction of goods and services tax are abating as expected.
More Asian Development Bank News... More Textiles News - India...