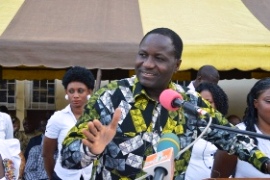 Mr. Sangafowa at the launch
The Minister of Agriculture of Ivory Coast, Coulibaly Mamadou Sangafowa, has launched a new branch of agricultural advisory council in the cotton sector, during the second day of Agricultural Administration Relocated program in the Mankono Department (province) of the country.
According to a statement issued by the Ministry, the new branch of agricultural advisory council for cotton sector is funded through a financial contribution by the European Union (EU), and is a unique structure which will oversee the production, processing and marketing of the crop.
Minister Sangafowa said the Manono province branch of advisory council for cotton comes at a right time, after a few days of officially establishing the Board of Directors Council of Cotton and Cashew of the country and the advisory council would ensure cotton growers in the country at least 60 percent of the international market price of the crop.
The Board of Directors Council would be working towards doubling the production of raw cotton in the country to 600,000 tons by 2016, and the advisory council would directly contribute towards improving the productivity of the cotton farmers, he added.
The new branch of cotton advisory council forms part of the National Agricultural Investment Program (NAIP), which looks to mobilize the agricultural sector of the country and create more jobs in the sector by 2016, through initiating various projects.
Last week, the Minister of Agriculture officially installed the Board of Directors Council for Cotton and Cashew in the country. The body is responsible for the regulation, monitoring and development of both the sectors, including cotton, which employs more than three million producers in the country.