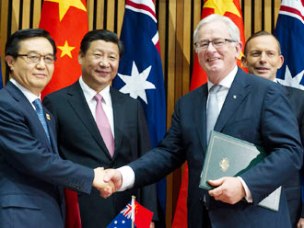 Australian Prime Minister Tony Abbott has announced the completion of negotiations for a China-Australia free trade agreement (FTA). Subsequently, Australian Trade and Investment Minister Andrew Robb and Chinese Commerce Minister Gao Hucheng signed a Declaration of Intent, undertaking to prepare the legal texts in both languages for signature.
Under the deal, said to be ‘the deal of a lifetime for Australia’s economy’, 85 per cent of all Australian exports will enter China duty-free. This will rise to 93 per cent within four years and 95 per cent when the deal is fully in force in more than a decade. Some of these goods are currently subject to tariffs of up to 40 per cent.
Under the FTA, China will get better access to Australian wool, while Australia will get Chinese textiles and apparel at lower prices.
“China-Australia FTA will add billions to the economy, create jobs and drive higher living standards for Australians,” said Abbott. “Australian businesses will have unprecedented access to the world’s second largest economy. It greatly enhances our competitive position in key areas such as agriculture, resources and energy, manufacturing exports, services and investment,” he added.
The negotiations for the China-Australia FTA have been going on since 2005 and it covers a complex series of agreements on agricultural tariffs and quotas, manufactured goods, services and investment.
China is Australia’s largest trading partner, with bilateral trade in goods and services crossing Au$150 billion in 2013—a substantial increase from about one-fourth of this amount of trade between the two countries a decade ago.
Australia’s Department of Foreign Affairs and Trade said rapid urbanisation and a growing middle class in the country of over 1.36 billion makes the FTA “vital to Australia’s future economy and prosperity”.
Meanwhile, the Australian Wool innovation (AWI) has welcomed the finalisation of the China-Australia FTA. In addition to the existing Tariff Rate Quota (287M kg on raw wool at 1%), the FTA delivers a duty free Country Specific Quota (CSQ) of 30M kg clean wool. The CSQ is to increase by 5 per cent compound pa over 8 years to 45M kg, AWI said.
About 75 per cent of Australian raw wool is exported to China, and in 2013, the value of Australian wool exports to China was $1.9 billion, according to AWI.
In recent months, Australia has signed similar agreements with Japan and South Korea. (RKS)