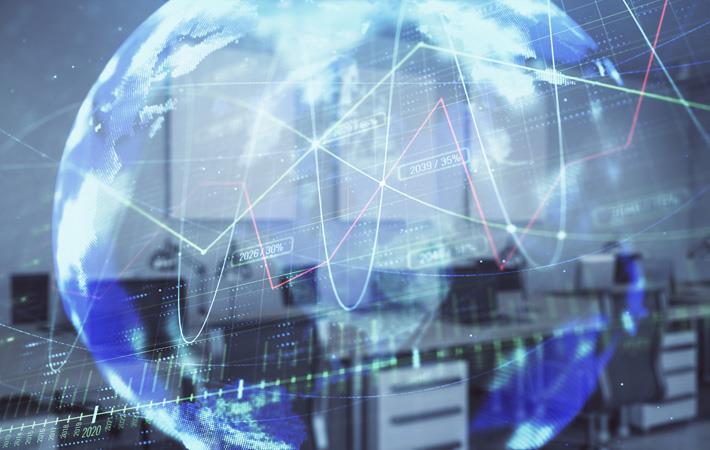 Pic: Shutterstock
Global economic growth is projected to edge up to 2.5 per cent in 2020 as investment and trade gradually recover from last year’s significant weakness, but downward risks persist, the World Bank says in a new report. Growth among advanced economies as a group is anticipated to slip to 1.4 per cent in 2020, partly due to continued softness in manufacturing.

Growth in emerging market and developing economies is expected to accelerate this year to 4.1 per cent. This rebound is, however, not broad-based; instead, it assumes improved performance of a small group of large economies, some of which are emerging from a period of substantial weakness, the bank says in its January 2020 Global Economic Prospects.
Global economic growth is projected to edge up to 2.5 per cent in 2020 as investment and trade gradually recover from last year's significant weakness, but downward risks persist, the World Bank says in a new report. Growth among advanced economies as a group is anticipated to slip to 1.4 per cent in 2020, partly due to continued softness in manufacturing.#

About a third of emerging market and developing economies are projected to decelerate this year due to weaker-than-expected exports and investment, the bank said in a press release.

“Steps to improve the business climate, the rule of law, debt management, and productivity can help achieve sustained growth,” she said.

US growth is forecast to slow to 1.8 per cent this year, reflecting the negative impact of earlier tariff increases and elevated uncertainty. Euro Area growth is projected to slip to a downwardly revised 1 per cent in 2020 amid weak industrial activity.

Downside risks to the global outlook predominate, and their materialisation could slow growth substantially. These risks include a re-escalation of trade tensions and trade policy uncertainty, a sharper-than expected downturn in major economies, and financial turmoil in emerging market and developing economies.

Even if the recovery in emerging and developing economy growth takes place as expected, per capita growth would remain well below long-term averages and well below levels necessary to achieve poverty alleviation goals.

There have been four waves of debt accumulation in the last 50 years. The latest wave, which started in 2010, has seen the largest, fastest, and most broad-based increase in debt among the four.

While current low levels of interest rates mitigate some of the risks associated with high debt, previous waves of broad-based debt accumulation ended with widespread financial crises. Policy options to reduce the likelihood of crises and lessen their impact should they materialise include building resilient monetary and fiscal frameworks, instituting robust supervisory and regulatory regimes, and following transparent debt management practices.

Productivity growth, a primary source of income growth and driver of poverty reduction, has slowed more broadly and steeply since the global financial crisis than at any time in four decades. In emerging market and developing economies, the slowdown has reflected weakness in investment and moderating efficiency gains as well as dwindling resource reallocation between sectors. The pace of improvements in many key drivers of labour productivity, including education and institution, has slowed or stagnated since the global financial crisis.

The use of price controls is widespread in emerging market and developing economies. While sometimes used as a tool for social policy, price controls can dampen investment and growth, worsen poverty outcomes, cause countries to incur heavy fiscal burdens, and complicate the effective conduct of monetary policy, according to the report.

Inflation in low-income countries has tumbled to a median of 3 per cent in mid-2019 from 25 per cent in 1994. The decline has been supported by more flexible exchange rate regimes, greater central bank independence, lower government debt and a more benign external environment.

However, to maintain low and stable inflation amid mounting fiscal pressures and the risk of exchange rate shocks, policymakers need to strengthen monetary policy frameworks and central bank capacity and replace price controls with more efficient policies, the report says.

Growth in the East Asia and Pacific region is projected to ease to 5.7 per cent in 2020, reflecting a further moderate slowdown in China to 5.9 per cent this year amid continued domestic and external headwinds, including the lingering impact of trade tensions.

Regional growth in Europe and Central Asia is expected to firm to 2.6 per cent in 2020, assuming stabilisation of key commodity prices and Euro Area growth and recovery in Turkey (to 3 per cent) and Russia (to 1.6 per cent). Economies in Central Europe are anticipated to slow to 3.4 per cent as fiscal support wanes and as demographic pressures persist, while countries in Central Asia are projected to grow at a robust pace on the back of structural reform progress.

Growth in Latin America and the Caribbean is expected to rise to 1.8 per cent in 2020, as growth in the largest economies strengthens and domestic demand picks up at the regional level. In Brazil, more robust investor confidence, together with a gradual easing of lending and labour market conditions, is expected to support an acceleration in growth to 2 per cent.

In Middle East and North Africa, regional growth is projected to accelerate to a modest 2.4 per cent in 2020, largely on higher investment and stronger business climates. Among oil exporters, growth is expected to pick up to 2 per cent. Infrastructure investment and business climate reforms are seen advancing growth among the Gulf Cooperation Council economies to 2.2 per cent.

In Sub-Saharan Africa, growth is expected to pick up to 2.9 per cent in 2020, assuming investor confidence improves in some large economies, energy bottlenecks ease, a pickup in oil production contributes to recovery in oil exporters and robust growth continues among agricultural commodity exporters.

Ambrose Chan
DSG International (Thailand) PLC
In Thailand, over 70% of disposable diapers used are in the ...