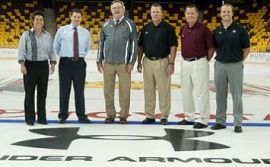 Following a highly-competitive bid process, the University of Minnesota Duluth has selected Under Armour as the official uniform, apparel and footwear partner for Bulldog athletics.

Bids were also received from Nike/Lids and adidas.

This five-year partnership represents the first department-wide agreement in which all 16 teams, comprised of more than 400 student-athletes, will be wearing uniforms, footwear and apparel from the same company.

The partnership begins with men's and women's hockey in 2013-14 and with the remaining 14 teams in 2015-16 as UMD fulfills its existing agreement.

The men and women hockey Bulldogs become only the second NCAA Division I program to sign on with Under Armour, joining another recent national champion, Boston College, in that group.

The agreement calls for Under Armour to provide product, game uniforms, rebates, discounts and incentives to UMD Athletics as well as discounts to the UMD Recreational Sports Outdoor Programs and its 25 club sports amongst others. UMD Stores currently features a wide variety of custom Bulldog Under Armour gear.

“This new partnership will help give our student-athletes the best opportunity to achieve on the national level,” said UMD Athletics Director Josh Berlo. “The Bulldogs will be competing in cutting-edge uniforms, apparel and footwear. Under Armour is an international leader and innovator in sport and we are proud to represent them while excelling athletically, academically and in the community."

In addition, Under Armour's regional distributor, Universal Athletic, will play a key role in the partnership by helping provide exceptional service to the Bulldog student-athletes.