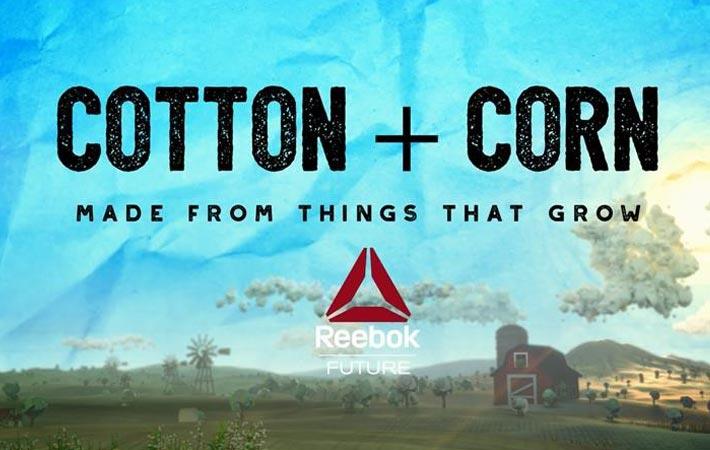 Global fitness brand Reebok has announced a new sustainable products initiative – ‘Cotton + Corn’ – under which plant-based footwear are expected to hit the market later in 2017. The first release in the new initiative will be a shoe with an upper made up of organic cotton and a base originating from industrial grown corn, a non-food source.

“This is really just the first step for us. With Cotton + Corn we’re focused on all three phases of the product lifecycle. First, with product development we’re using materials that grow and can be replenished, rather than the petroleum-based materials commonly used today.  Second, when the product hits the market we know our consumers don’t want to sacrifice on how sneakers look and perform. Finally, we care about what happens to the shoes when people are done with them. So we’ve focused on plant-based materials such as corn and cotton at the beginning, and compostability in the end,” said Bill McInnis, head of Reebok Future.

“We like to say, we are ‘growing shoes’ here at Reebok. Ultimately, our goal is to create a broad selection of bio-based footwear that can be composted after use. We’ll then use that compost as part of the soil to grow the materials for the next range of shoes. We want to take the entire cycle into account; to go from dust to dust,” said McInnis.

“Reebok’s philosophy is to ‘Be More Human,’ and sustainability is a core part of that belief. As human beings, we have a responsibility to leave this planet as we found it for future generations. Unfortunately, the fact is most shoes just end up in landfills, which is something we are trying to change. As a brand, we will be focusing on sustainability with the Cotton + Corn programme as well as other initiatives we have in the works,” said Reebok president Matt O’Toole.

“Reebok has a long history of innovation and of being a socially responsible company. The Reebok Future team was created to innovate not only the products we make, but also the process by which we make them. Cotton + Corn is another great example of this, and one that can have a long-term positive impact on the world,” said O’Toole. (SV)

Gap Inc, a US-based specialty apparel company, has reported its...