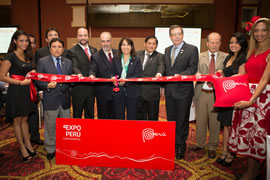 Panamanian market is the ideal destination for the development of Peru's non-traditional exports, including textiles and garments, Peru’s Minister of Foreign Trade and Tourism, Magali Silva Velarde-Alvarez, has said.
Speaking at the Expo Peru Central 2013 in Panama City, Ms. Silva said Peruvian and Panamanian economies are complementary and can be mutually reinforcing.
She said the greatest opportunities for non-traditional exports from Peru to Panama are in textile and garment sectors, among others.
Making a presentation on the business opportunities in Peru, the Minister said Peru’s total exports to Panama totaled US$ 500 million in 2012, while its imports from Panama totaled approximately US$ 50 million.
Mr. Ricardo Quijano, Minister of Commerce and Industry of Panama, said one of the priorities of his country’s trade agenda is to push the negotiations to be a member of the Pacific Alliance.
ExpoPerú Central America provided a great opportunity for Peruvian entrepreneurs to contact a large number of importers in both Costa Rica and Panama.
According to the Peruvian Ministry of Foreign Trade and Tourism (MINCETUR), the trade fair generated sales of US$ 7.8 million in Costa Rica and another US$ 10 million in Panama.
The Ministry is now planning to organize ExpoPeru in Colombia, Brazil and Mexico in the coming months to further promote exports and tourism in the country.